Andrea has been married to Pia Masnini since 1988.

He performed his military service as an officer in the Carabinieri.

An expert in multichannel communication (Arnoldo Mondadori Editore, De Agostini, Gruppo Editoriale Fabbri) and cultural promotion, he has curated highly successful historical exhibitions, including Omanut 1906-2006 100 years of Israeli life and art at Milan’s Palazzo Reale in the autumn of 2006.

In 1995 he worked with Proedi Editore to produce Destinazione Auschwitz, the first multimedia work on the Shoah and winner of the European Commission’s Innovation Prize.

As president of Where Italia srl, in 2010 he launched the monthly magazine Where Milan, now a benchmark for information services to international visitors. In 2016 he created a similar monthly guide to the city of Venice.

He has been active since 1985 in traditional and digital communication, since 2012 also whith a significant share in Fenix srl, specialized in training services, and Sabel Italia srl (founded in 1985), a leading business in Milan in the distribution of advertising materials with the Welcome to Milano network. 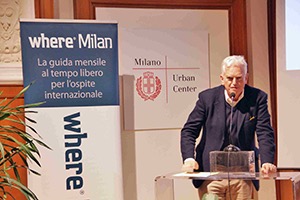 In 2012, with a group of friends, he founded the cultural association Milano Loves You to promote Milan internationally as a tourist destination. For the past six years, the association has organized the Milano Loves You Run, with proceeds going to fund the assisted living facilities of the Italian League for the Fight against Cancer (LILT).

He is a member of the Steering Committee and Scientific Committee of the Osservatorio Metropolitano di Milano, of which he is the Director of Tourism.

Since 2015 he has served as chairman of Keren Hayesod Italia Onlus, a fundraising organization for the promotion of Israeli national priorities.

He is a member of the Rotary Club Milano Arco della Pace. He has been recognized as a Paul Harris Fellow for having contributed actively in the spring of 2017 to the success of the initiative Milano dove Vai?. With the Rotary Club, he created the digital project titled Museo Milano and helped develop the Explorers and Ambassadors project addressed to children in the Milanese schools to help them become active citizens and ambassadors for their city.

With Bruno Dapei and Fabio Massa, Andrea created the WikiMilano project in the summer of 2017.

In 2015, the year of the Milan Expo, he published two and a half million free visitor maps of the city, setting un unprecedented record for Italy.